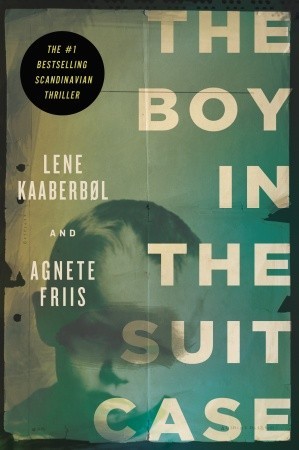 This is an older book and the first in a series that follows Nina Borg, a Red Cross nurse and a compulsive do-gooder who can’t say no when asked for help. To be honest, I hadn’t heard of this series, as this isn’t a frequent genre for me, but when I pass a book with the title The Boy in the Suitcase, I need to know two things: is he still alive and why the hell did they put him in a suitcase? Well done, ladies. You baited the hook and caught me. I think we all know at least one Nina, the person with the heart of gold who tends to get in over their heads because they just can’t walk away from something they shouldn’t have to contend with alone. As with Nina, this can often result in problems at home and at work, because they set aside their own life in the name of making a difference.

I would do a synopsis at this point in a review, but it’s really quite simple: Someone puts a boy in a suitcase and Nina finds him.

Ok, so it’s not much of a spoiler to say the kid is actually still alive. He’s naked, drugged and doesn’t speak the same language as Nina, but he is still alive. He’s also just three years old, and there’s a horribly aggressive man who is angry that Nina took the “package” he was supposed to intercept and he wants it back. He will stop at nothing to get it back, including murder. Not knowing who she can trust, Nina goes on the run desperately trying to figure out who the boy is and where he’s from so she can deliver him to safety before he once again falls into the wrong hands and she winds up dead. It actually really bothered me that Nina didn’t just go to the police. It’s the equivalent to the girl who runs upstairs in a horror movie instead of going out the backdoor to the neighbor’s house for help. I mean, there was really no logical reason to do what she did. As Nina gets closer to the heart of the story, she will uncover truths long buried about the boy, his mother, who is hunting him and why they seek him.

Trigger warning, there are some really disturbing aspects of this book. Human trafficking and abuse are very prevalent themes. I have a bit of an iron constitution when it comes to difficult themes, so it takes an awful lot to disturb me, but it’s certainly worth noting here in case readers avoid certain topics. There’s so much human depravity in the world, and I choose to face it head on instead of closing my eyes, though I don’t blame people for doing so. Life is hard enough as it is without opening yourself up to the rest of the world’s suffering.

If you can stomach the difficult stuff, there’s a lot to like with this book. It’s very exciting and well paced. I really enjoyed the character of Nina, and I thought it was quite sweet the way her relationship with the boy develops. I think that could have been explored a bit more, to be honest. There are multiple threads to the story. One follows the boy’s mother after the abduction, so there’s really no mystery as to the boy’s origin for the reader. We are merely following Nina through her journey in search of the truth. But don’t worry, there are plenty of other surprises along the way to keep the reader guessing. A third thread follows the man we know hired the goon to kidnap the boy. We just don’t know why he did it. We even get the perspective of the man hunting them, which really is quite interesting, though I’m not sure it was entirely necessary. At first I think it helped to humanize him but as the story spiraled downward toward the conclusion, he became less human and more monstrous. Ultimately, I don’t think it really helped our understanding of the story or his character at all. It was a pretty typical “bad guys bad” and “good guys good” single layered approach to reality. This was made a bit better by the big reveal at the end which gave a slight challenge to this notion.

Overall, this is an enjoyable read that only left me with a few minor quibbles. 3 stars.

I'm a law librarian from the state of Missouri and a graduate of Missouri State University and the University of Missouri-Columbia. My real passion is in fiction, which is why I started my blog to share my thoughts with other bibliophiles. I live with my husband and two wonderful children and a collection of furry feline companions.
View all posts by Amy @ A Librarian and Her Books →
This entry was posted in mystery, thriller, Uncategorized and tagged book review, books, fiction, human trafficking, kidnapping, reading. Bookmark the permalink.