The Secret Keeper of Jaipur by Alka Joshi – A Book Review 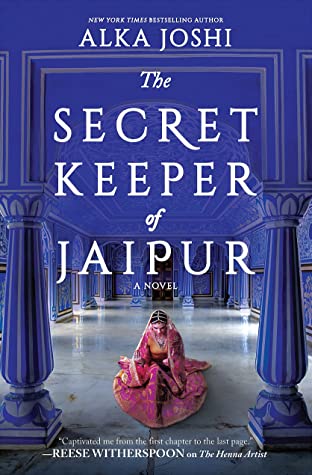 The Secret Keeper of Jaipur is Alka Joshi’s followup to her stunning novel, The Henna Artist. I will try to do this review without giving spoilers for either novel. I will recommend that readers do read The Henna Artist first, but Joshi does pepper the sequel with reminders that elucidate things that happened in the first novel, so one could potentially read the second without reading the first. But what’s the fun in that? Knowing the events of the first novel is extremely helpful for putting events and characters in this novel into context, an it’s especially helpful when you’ve already developed an affection for the characters. Except for one pivotal character in this novel, most of those featured were major fixtures in the first.

The year is 1969, 12 years after the events of the first novel. Lakshmi now directs the Healing Garden at the hospital in Shimla. Malik is 20 years old and has finished his private education. He returns to Jaipur to apprentice with Manu in the building trade, completely unrecognizable to the wealthy elites of Jaipur as the young, poor street urchin who followed Lakshmi around as a boy. When a tragedy occurs on the opening night of a new state of the art cinema in Jaipur, those responsible quickly work to cover their role in the disaster and blame the most convenient source, someone very important to Malik and Lakshmi. Malik sets off on a journey to discover exactly what happened to protect his friend from the career-ending shame that would erupt with such a scandal.

Thankfully, Alka Joshi appears to be immune from second book syndrome. This book is as rich and complex with character development as impeccable as the first. I don’t think I liked it quite as much, and this is mainly because Lakshmi still has my heart and I missed getting her perspective for the entirety of the novel. This time, we follow the narrations of three people: Lakshmi, Malik, and a new character named Nimmi, a young widow from one of the mountain tribes with whom Malik falls in love but must leave when he goes to Jaipur. Nimmi and Lakshmi have a bit of a strained relationship, and I enjoyed seeing how this played out. It added layers and textures to the development of their bond as the story progressed. And while Lakshmi may be more wise and seasoned than the younger girl, she still had some growing to do in this book, and I like that. It’s a fact of life that one never actually reaches perfection, and only the foolish would think they’ve stopped growing as a human.

There are really two layers to this plot from a suspense standpoint. Malik, in Jaipur, is battling the forces of power and influence among Jaipur high society. Ravi Singh, somewhat of a villain from the first novel, once again takes a principal place in the narrative, and he’s just as vile and gag-inducing as before. Honestly, I didn’t feel like there was really anything surprising about the thread following Malik, the Singhs, and the cinema collapse. It was more about Malik’s journey to uncovering the truth we knew all along.

I honestly thought the more compelling of the two narratives was Nimmi’s story that brings in a real historical issue in India that was sparked by the passage of the Gold Control Act of 1968. When the government drastically placed restrictions on the sales of gold within the country, smugglers took over and organized crime grew at a rapid pace. Even legitimate jewelers were forced to buy from smugglers in order to bring gold jewelry to everyday people. Average citizens who needed money had no choice but to aid in the smuggling of gold to feed their families. When Nimmi and Lakshmi find themselves embroiled in a dangerous game to protect the people they love, things get really intense. This part was both informative from a historical standpoint and extremely exciting.

Eventually, Joshi managed to weave the two narratives together in an expert fashion, and I enjoyed almost every second of it. While I do believe it’s incredibly accurate because… well… men… I did get a little bit tired of Malik’s constant drooling over Sheela. That being said, I did feel Joshi did an excellent job of giving Sheela a bit more depth in this novel. While I still didn’t like her very much, I did respect her and felt a bit sorry for her. She was as much stuck in her life as anyone else, something so common for women in India in this time no matter how much wealth and beauty they possessed. She certainly wasn’t without her faults, though there’s a part of me that could understand how she came to be the way she was. Women have to grasp at whatever semblance of power they can find. Sheela did sometimes try to act with integrity. as ineffective as it may have been.

While I was really looking forward to getting Malik’s perspective, his part was unfortunately my least favorite part. Firstly for the already mentioned reason of his thirst that we kept needlessly coming back to. Secondly, I became a little bit bored with the slightly repetitive construction technicalities that were essential to understanding the cinema collapse scandal. While I was rooting for him to solve it, I didn’t necessarily care about the minute details, and we seemed to go over them too much. Truly, this was pretty mild and I consider it nit-picking. I really did enjoy this book very much and will definitely pick up the third installment in the series when it’s released.

Overall, 4 stars from me.

I'm a law librarian from the state of Missouri and a graduate of Missouri State University and the University of Missouri-Columbia. My real passion is in fiction, which is why I started my blog to share my thoughts with other bibliophiles. I live with my husband and two wonderful children and a collection of furry feline companions.
View all posts by Amy @ A Librarian and Her Books →
This entry was posted in General fiction, Literary Fiction, Uncategorized and tagged book blog, book review, books, fiction, reading. Bookmark the permalink.