I’m introducing a new Wednesday meme since I really haven’t had much book review progress this week! This one is called Shelf Control, and it’s hosted by Lisa @ Bookshelf Fantasies. The concept is to pick a book that you’ve had on your shelf for a while but haven’t read and do a little feature on it. I have sooooo many books at home that I’ve set aside for a rainy day. If you’re like me, you keep patronizing the library and have a constant stream of new reads, so you completely neglect the books you have at home. For the last few months of this year, I’m absolutely determined to tackle some of these dusty, lonely books. For my first episode today, I have the perfect one to feature! 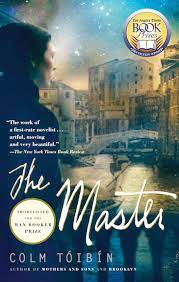 The Master by Colm Toibin

Synopsis: “‘Colm Tóibín’s beautiful, subtle illumination of Henry James’s inner life’ (The New York Times) captures the loneliness and hope of a master of psychological subtlety whose forays into intimacy inevitably fail those he tried to love.

Beautiful and profoundly moving, The Master tells the story of Henry James, a man born into one of America’s first intellectual families who leaves his country in the late nineteenth century to live in Paris, Rome, Venice, and London among privileged artists and writers. With stunningly resonant prose, ‘The Master is unquestionably the work of a first-rate novelist: artful, moving, and very beautiful’ (The New York Times Book Review). The emotional intensity of this portrait is riveting.”

Why I chose it: I chose The Master because it’s been on my shelf for a really long time. It’s a book published in 2004, and this version is a 2005 edition, and it’s probably been on my shelf for that long. It’s moved in boxes to a couple of different houses with me. I have it on my list to pick up ASAP, and I’d already decided on it for my reading challenge pick of “A book you own but haven’t read.”

I positively love Henry James. The Turn of the Screw has long been one of my favorite psychological horror novels. My son is named Henry, partly after Henry James. But if you ask my husband it’s because of Superman. Please don’t tell him the truth and blow my cover.

There you have it! That’s my shelf control pick for this week. What’s one book on your shelf that you’ve been really wanting to finally get to. Which one calls to you from it’s place late at night when your brain is fighting sleep? Feel free to share in the comments.

I'm a law librarian from the state of Missouri and a graduate of Missouri State University and the University of Missouri-Columbia. My real passion is in fiction, which is why I started my blog to share my thoughts with other bibliophiles. I live with my husband and two wonderful children and a collection of furry feline companions.
View all posts by Amy @ A Librarian and Her Books →
This entry was posted in Uncategorized and tagged book review, books, fiction, henry james, reading, shelf control. Bookmark the permalink.