I added a couple of TBR’s this week, so I’m beginning my cleanup with 501. I’ll dispense with the formalities and get right to it.

Synopsis: “With powerful and swift, prose, Flight follows this troubled foster teenager–a boy who is not a “legal” Indian because he was never claimed by his father–as he learns that violence is not the answer.

The journey for Flight‘s young hero begins as he’s about to commit a massive act of violence. At the moment of decision, he finds himself shot back through time to resurface in the body of an FBI agent during the civil rights era, where he sees why “Hell is Red River, Idaho, in the 1970s.” Red River is only the first stop in an eye-opening trip through moments in American history. He will continue traveling back to inhabit the body of an Indian child during the battle at Little Bighorn and then ride with an Indian tracker in the nineteenth century before materializing as an airline pilot jetting through the skies today. During these furious travels through time, his refrain grows: “Who’s to judge?” and “I don’t understand humans.” When finally, blessedly, our young warrior comes to rest again in his own life, he is mightily transformed by all he has seen.”

Verdict: I really enjoy Sherman Alexie’s books and films. This one has good reviews overall, and I think it’s an important one for me to finally get to one day. 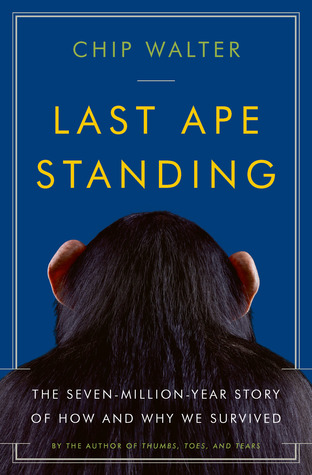 Last Ape Standing: The Seven-Million-Year Story of How and Why We Survived by Chip Walter

Synopsis: “Over the past 150 years scientists have discovered evidence that at least twenty-seven species of humans evolved on planet Earth. These weren’t simply variations on apes, but upright-walking humans who lived side by side, competing, cooperating, sometimes even mating with our direct ancestors. Why did the line of ancient humans who eventually evolved into us survive when the others were shown the evolutionary door? Chip Walter draws on new scientific discoveries to tell the fascinating tale of how our survival was linked to our ancestors being born more prematurely than others, having uniquely long and rich childhoods, evolving a new kind of mind that made us resourceful and emotionally complex; how our highly social nature increased our odds of survival; and why we became self aware in ways that no other animal seems to be. Last Ape Standing also profiles the mysterious “others” who evolved with us-the Neanderthals of Europe, the “Hobbits” of Indonesia, the Denisovans of Siberia and the just-discovered Red Deer Cave people of China who died off a mere eleven thousand years ago. Last Ape Standing is evocative science writing at its best-a witty, engaging and accessible story that explores the evolutionary events that molded us into the remarkably unique creatures we are; an investigation of why we do, feel, and think the things we do as a species, and as people-good and bad, ingenious and cunning, heroic and conflicted.”

Verdict: Hmm… well, at the moment I’m not really in a nonfiction and especially a science-y state of mind. However, this is a subject I do enjoy, and the reviews detail this as being a book that’s accessible for non-science experts like myself with a passing interest. I think I’ll keep it for now.

The Secret Keeper of Jaipur by Alka Joshi

Synopsis: “It’s the spring of 1969, and Lakshmi, now married to Dr. Jay Kumar, directs the Healing Garden in Shimla. Malik has finished his private school education. At twenty, he has just met a young woman named Nimmi when he leaves to apprentice at the Facilities Office of the Jaipur Royal Palace. Their latest project: a state-of-the-art cinema.

Malik soon finds that not much has changed as he navigates the Pink City of his childhood. Power and money still move seamlessly among the wealthy class, and favors flow from Jaipur’s Royal Palace, but only if certain secrets remain buried. When the cinema’s balcony tragically collapses on opening night, blame is placed where it is convenient. But Malik suspects something far darker and sets out to uncover the truth. As a former street child, he always knew to keep his own counsel; it’s a lesson that will serve him as he untangles a web of lies.”

Verdict: Well, this one is easy. I absolutely loved The Henna Artist and have been eagerly awaiting reading this follow-up. It looks like this one is from Malik’s perspective, which is great. He’s a character from the first I really enjoyed. Definitely keeping this one as a TBR ASAP. 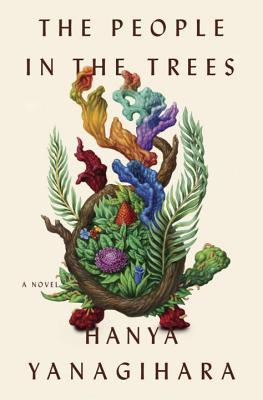 The People in the Trees by Hanya Yanagihara

Synopsis: “In 1950, a young doctor called Norton Perina signs on with the anthropologist Paul Tallent for an expedition to the remote Micronesian island of Ivu’ivu in search of a rumored lost tribe. They succeed, finding not only that tribe but also a group of forest dwellers they dub “The Dreamers,” who turn out to be fantastically long-lived but progressively more senile. Perina suspects the source of their longevity is a hard-to-find turtle; unable to resist the possibility of eternal life, he kills one and smuggles some meat back to the States. He scientifically proves his thesis, earning worldwide fame and the Nobel Prize, but he soon discovers that its miraculous property comes at a terrible price. As things quickly spiral out of his control, his own demons take hold, with devastating personal consequences.”

Verdict: While I’m still intrigued by this, perusing the reviews show just how disturbing the content in the book is. I’m not sure I want that at this point. Maybe some day I’ll change my mind and stumble across this one again, but for now I think I’ll remove it.

The Wall by Kelsey Tara Nicole

Synopsis: “Markets filled with mixed odours and the buzz of merchants desperate to make a sale. Labourers working strenuously long hours for little pay. Children of all ages roaming unsupervised, forced to raise themselves. Streets like mazes, where no one would want to find themselves wandering alone after dark. This is certain within the City, the only known civilization: poverty and corruption are inescapable. The only uncertainty lies behind the vast, red-brick wall outside the City limits, its existence ignored out of fear and distrust. Eden, a young girl who yearns for more, is given an extraordinary opportunity to see what, or who, resides behind the ancient wall. She will have to decide for herself whether to be afraid or comforted by what she finds.”

Verdict: This does look interesting, but it would appear it was a Giveaway I entered a while back, and it doesn’t have a lot of ratings, which tells me it might be pretty hard to get a hold of. Not sure I’m that invested to really track an obscure book down, so I’m going to remove this one.

There you have it. I feel like I end a lot of weeks at 499. I guess that’s my number. Next up I’ll have a couple of reviews coming down the line, as I finished two books yesterday. Come to think of it, I’ll finish one today as well. I’ve been a busy bee! Happy Reading!

I'm a law librarian from the state of Missouri and a graduate of Missouri State University and the University of Missouri-Columbia. My real passion is in fiction, which is why I started my blog to share my thoughts with other bibliophiles. I live with my husband and two wonderful children and a collection of furry feline companions.
View all posts by Amy @ A Librarian and Her Books →
This entry was posted in Uncategorized and tagged book review, books, fiction, reading, TBR Thursday. Bookmark the permalink.