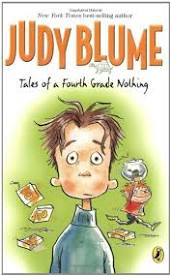 This year for the reading challenge, I was challenged to pick up an old favorite book from childhood. When I think about authors whose books I enjoyed as a kid, several names come to mind. Among them: Beverly Cleary (I almost chose The Mouse and the Motorcycle), Lois Lowry, and, of course, Judy Blume. I recently picked up a Judy Blume box set for my daughter at a library book sale, and I hope she’ll one day like them as much as I did. Nobody spoke to the childhood fears and anxieties like Judy Blume. Tales of a Fourth Grade Nothing was one of my favorites, and I’m not really sure why. First of all, I was the younger kid, unlike Peter. And second of all, as a girl I didn’t have exactly the same experience as a 9-year-old boy. Honestly, I was probably a lot more like smarty-pants Sheila. I’m sure someone thought I was annoying and pretentious, though I didn’t run around talking about cooties all the time. Not that I remember, anyway.

Peter Hatcher lives in a little apartment with his mother and father and his little brother, Farley Drexel Hatcher, who everyone calls Fudge. Fudge is 2 1/2 years old at the beginning of the book, but he celebrates his third birthday to hilarious results during the course of the story. Fudge is a pain in the butt, and Peter hates how everyone always thinks he’s so special just because he’s little and cute. Peter wants to be special, too, but he’s always in cute little Fudgie’s shadow. The book is full of Peter’s various tales about how Fudge’s antics threaten to ruin his life.

It was wonderful to revisit this book, and it’s especially interesting reading this now that I’m a parent as opposed to the child around the same age as Peter like I was upon my first reading. The family dynamics are definitely different from my more modern family. This book was published in 1972 and, though family structures were definitely already changing as more women entered the workforce, it was still so much more common for women in the home to do almost all of the parenting and housework by themselves while the husband worked. I definitely sympathized a lot with Peter and Fudge’s mom who seemed so entirely overwhelmed. That’s something I never would have picked up on in the early 90’s when I read this. I was also completely shocked to see that parents in this book actually dropped their 2-4 year old children off for birthday parties and didn’t stay to help the host wrangle them! Was that really a thing??? I would be aghast to have to be in charge of 4 or more children of that age all by myself for two hours! Oh, the humanity!

I was still able to sympathize with Peter, which then allowed me to see what my own daughter goes through. My children are 6 and 3. I can’t tell you how many times Willa has complained that “you love Henry more than me” or “Henry’s the only one who…” I know this is only natural, as younger children do tend to monopolize a parent’s time because they are so much less independent and prone to doing much dumber things. The older children in the home do still need assurances that they are special and important. Fudge obviously adores Peter and wants to please him, but in his position as the neglected older child he often doesn’t understand his important place as the super cool older brother. Fudge is annoying, but his relentless quest to do everything “like Peet-uhh” is the only way at such a young age he knows to show his love. I absolutely see this in my own home. Willa both loves and loathes her little brother, and he looks at her with complete and utter adoration despite the fact that he regularly tells her she’s “so toopid.”

Long story short, there’s so much truth in this book and so much relatable content for anyone of any age who has spent time in a multi-child home. This book is the quintessential therapeutic text for the much-maligned and oft misunderstood older sibling. Kids are emotional beings who are still developing their skills at communicating these emotions. It really helps to know that there is someone out there who understands, and Judy Blume is definitely that person. This book is funny, heartfelt, and timeless. But oh, poor Dribble!!!

I'm a law librarian from the state of Missouri and a graduate of Missouri State University and the University of Missouri-Columbia. My real passion is in fiction, which is why I started my blog to share my thoughts with other bibliophiles. I live with my husband and two wonderful children and a collection of furry feline companions.
View all posts by Amy @ A Librarian and Her Books →
This entry was posted in Children's fiction and tagged book review, books, children's book, reading. Bookmark the permalink.