The Hypnotist’s Love Story by Liane Moriarty – A Book Review 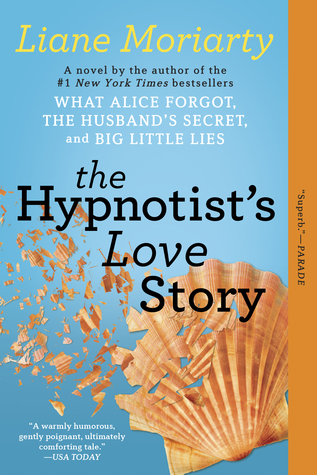 Liane Moriarty is one of those novelists whose work I eagerly anticipate. Her characters are always refreshingly human, quirky, and endearingly flawed. The plots of her books are unique, and each one is typically infused with a great mix of humor and poignancy. I can relate to many of the characters, always strong women navigating the difficult aspects of life. The Hypnotist’s Love Story, was one of two novels by Moriarty I hadn’t yet read. Now I have one final one, her newest, Nine Perfect Strangers. Her upcoming title, Apples Never Fall, is slated for release coming up in September of this year. That title screams of intriguing family drama, and I’m certainly here for it, because Moriarty does that quite well. This year I plan to tackle both and finish up the Moriarty library thus far.

Ellen O’Farrell is a single woman with a successful and fulfilling career as a hypnotherapist. Most things in her life are satisfying. Her mother is a bit eccentric, she’s never known her father, but she has a few close friends and she lives in the beloved house left to her by her grandparents. The only thing she truly lacks is a successful love life. So when she meets Patrick, a handsome widowed surveyor and single father, she starts to believe things could change for her. Until the night he tells her about Saskia, Patrick’s stalker. Instead of being upset by the news, Ellen finds herself fascinated by Saskia’s presence. She wants to know more about her, to understand her motivations. What she doesn’t realize is that she already knows Saskia, and things are about to get very interesting.

Look, most of Moriarty’s books I absolutely love. Rich, intriguing characters are the driving force of her books. And each has its own unique plot, and her prose is quite charming. This one, however, I thought was lagging behind the rest. Merely glancing at other reviews and judging by the average rating on goodreads, I’m not alone in this being my least favorite of her novels. Ellen, while I thought she was a compelling character, just wasn’t as likeable as some of Moriarty’s other protagonists. Honestly, the most compelling character was Saskia. I enjoyed how we got the story from two different angles. Ellen’s portion was told in third person while Saskia’s portion was told in first person. We toggled back and forth fairly quickly between the two perspectives. I liked this as a device, and it was much easier to tell the two sections apart because of this narrative style. But I also think that’s why Saskia was a more compelling character. I thought Moriarty handled the psychological aspect of the stalker quite well. In her case, we are able to develop a kind of empathy for Saskia. She’s certainly been through a lot, and she has her reasons for having difficulty letting go. But the book makes it very clear the dividing line between compulsion and action on those compulsions. It highlights the sickness in a way that doesn’t undercut the damage that’s done to the target. At first I was a bit worried about this, because I felt so much on Saskia’s side. I had to keep reminding myself that she was the villain in the story. But Moriarty does circle back around on this, and I think she does so in an appropriate way.

Patrick was definitely my least favorite character. Don’t get me wrong, I like the fact that he’s portrayed as an average guy. His hair is thinning, he has issues with patience, and he procrastinates something fierce. He’s a great dad, and he has a good job and a nice family. Once he and Ellen truly become serious, however, there are a lot of red flags. Not just Saskia red flags but Patrick red flags. Honestly, his intense obsession with his dead wife would have been enough to send me packing. He talked about her constantly. Her presence was a ghost in the room everywhere they went. Keeping her memory alive for the sake of their son is one thing, but Patrick’s constant “Colleen this” and “Colleen that” and “Colleen did it this way” was just too much. My heart ached for Ellen every time he did this, and then I got angry with her for not telling him to knock it the hell off. You should not force your new partner to live in your old partner’s shadow, and the fact that Patrick was too obtuse to see that was infuriating. Even when he gave Ellen an explanation, it still didn’t sit well with me. No relationship is perfect, but theirs just had some major stumbling blocks right from the start.

Additionally, while this book held my attention, I found myself expecting more. I mean, save for one fairly difficult ordeal near the end of the novel, there really wasn’t much of a climax. It was a nice story, but it wasn’t really a great story. Trust me, I know Moriarty is capable of a great story. This is, at best, a decent book that will be forgotten fairly quickly, but I can definitely forgive Moriarty for that fact. I still maintain the woman hasn’t written a BAD book. Even superb writers put out average material now and then, and that’s ok. I will still be looking forward to the next one.

Overall, I give this one 3 stars.

I'm a law librarian from the state of Missouri and a graduate of Missouri State University and the University of Missouri-Columbia. My real passion is in fiction, which is why I started my blog to share my thoughts with other bibliophiles. I live with my husband and two wonderful children and a collection of furry feline companions.
View all posts by Amy @ A Librarian and Her Books →
This entry was posted in General fiction, Uncategorized and tagged book review, books, LibGirlBooks. Bookmark the permalink.