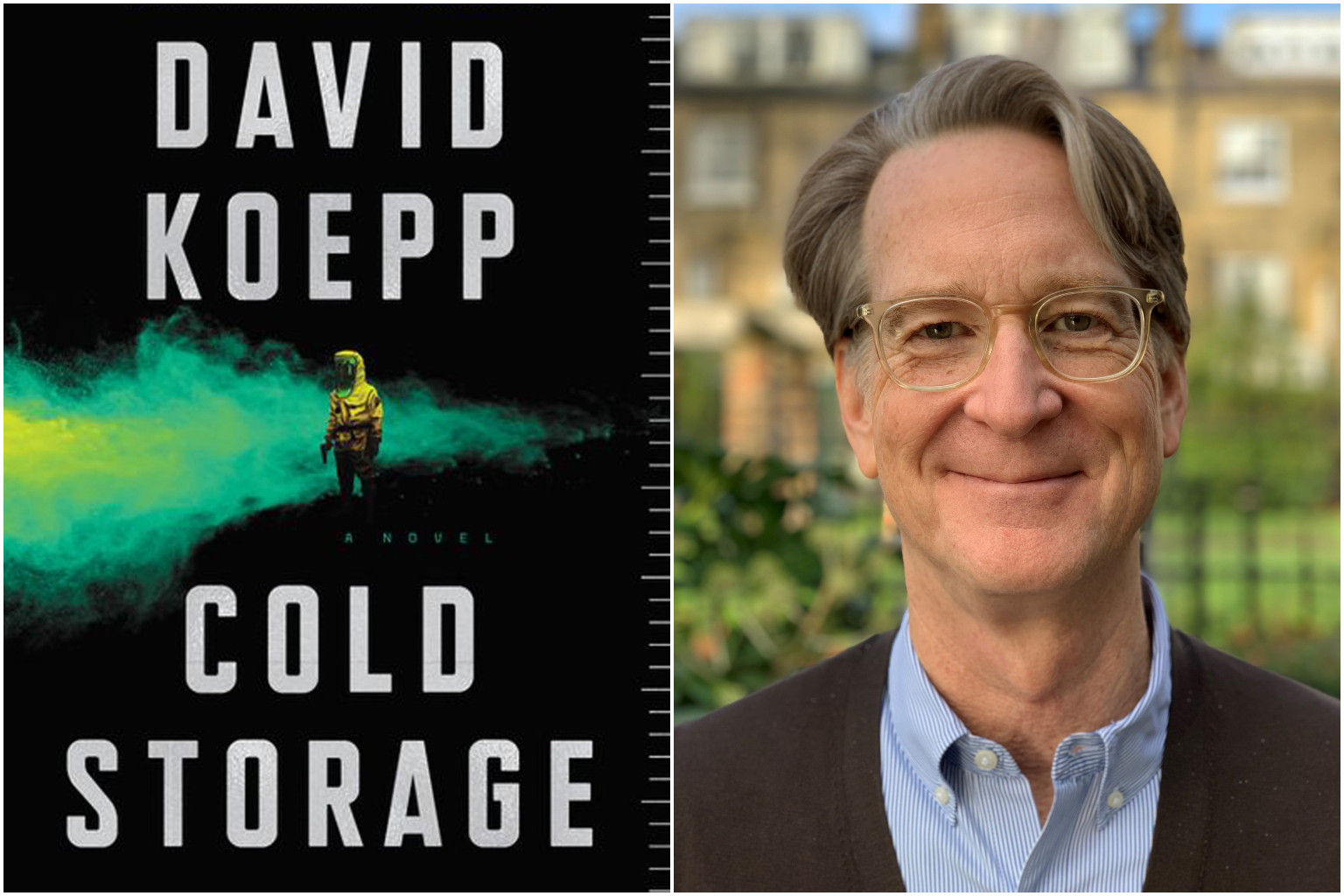 While his name might not immediately ring any bells for a lot of readers, odds are every single person who reads this review has encountered the work of David Koepp at some point in the past thirty-plus years. Koepp is a veteran screenwriter and director in Hollywood with tons of blockbuster credits to his name. These include Jurassic Park, Mission: Impossible, Carlito’s Way, and Panic Room. Basically, the man has an intimate understanding of suspense. Cold Storage marks his debut novel. While I think it pales in comparison to his fabulous Hollywood work, this is a pretty solid effort.

Cold Storage begins in 1987 with a specialized team of bioterror experts, Roberto Diaz and Trini Romano, leaving something bad in a cold storage facility tucked into the limestone mines in Atchison Kansas. How bad? We’ll get there. Roberto is introduced as the perfect man’s man. A hotshot hero who is a little too handsome and is in possession of superb physical and mental capabilities that ensure that he’s pretty much the most impressive specimen on Earth. He even has the perfect wife and perfect kid as the cherry on top. Trini is his brash but likeable sidekick. We very quickly jump back to the beginning of the expedition where our two prospective heroes go with an impossibly sexy and charming microbiologist with a thirst for married men to a remote town belonging to a tribe of just 26 aboriginal members of the Pintupi tribe, a tribe that ceased to exist all within a matter of hours. What killed them is what our heroes are there to find, a deadly fungus from space that had been lying dormant in this sleepy outback town since its arrival on Earth in 1979. They take a sample, nasty fungal you-know-what hits the fan, and the team members nuke the town and save humanity. Or so they think.

Brief side note about the beginning. I won’t lie. This isn’t my typical genre. I don’t read a lot of suspense thrillers and when I do I tend to do a bit of eye rolling at the typical character tropes and stereotypes. Especially those that add an unlikely and oddly placed sexual dynamic between two people in the middle of a potentially planet altering crisis. I’m sorry, but if I’m traveling to a remote village in search of a deadly pathogen, the last thing that will be on my mind is a romp in the airplane restroom with my married colleague whom I just met 20 minutes prior. I do sort of get why Koepp added this part. He thrusts Diaz into a position of having to make an ethical choice in regard to giving in to temptation. But the result is that the ironically named Hero (sexy lady scientist) gets thrust into the role of evil temptress causing readers to instantly dislike her and, consequently, making what could have been a vital character annoying and expendable. At this point in the story, I was really afraid that further reading would just deliver more narrative about loose useless women and the heroic men that clean up their messes. Even Trini had been introduced as slightly weak, in love with her partner, and needing his rescue on more than one occasion. Thankfully, better and less cringe-worthy things were to come.

Back to our story, the narrative later jumps to the present. We get two new central characters: Travis and Naomi. Both work as night guards at the storage facility. These two characters actually saved the story for me. Travis, also known as Teacake, is a bumbling but likeable young man who is entirely too trusting and talks too much. One gets him into a lot of trouble and the other ensures he doesn’t get out of it. After a brief prison sentence, due in 100% part to that gullibility issue we talked about, Teacake absolutely must keep his job at the cold storage facility in Atchison, Kansas. One night he finally gets the nerve to introduce himself to the new girl, quiet Naomi who has taken on a part-time gig at the storage facility to support her young daughter while also trying to finish school. Together the two find themselves in a heap of trouble after they investigate a mysterious beeping coming from the walls.

We also bring back into the story Roberto Diaz. Though he’s retired, he’s the only one who knows the sheer power of this fungus and the threat is poses to humanity, so he exits retirement for one final mission to save the planet. Together, Roberto, Naomi, and Teacake make up a very unlikely ragtag team of heroes. While it once again borders on cliche, I thought this worked. Now in his 60’s, Roberto isn’t quite the impressive specimen of a man he once was. While he still has full control over his wits, his body doesn’t quite cooperate like it used to, which occasionally causes a bit of extra suspense. It’s not everyday the hero of a story is thwarted by his own back muscle spasms while trying to take down a formerly human fungus zombie. Oh yeah, did I mention the fungus takes over the human brain and turns the host into a walking gooey mess of zombie goop hell bent on sharing the love?

My biggest quibble with this, and the reason I hope they never make this into a movie, is it’s really gross. That’s not necessarily a bad thing, because I know some readers love the gooey gore of seeping orifices and exploding bodies, but it’s not exactly my cup of tea. I also don’t really enjoy the idea that this is actually speculative fiction. Of course there are organisms out there with the power to overtake humanity and destroy all life on Earth. We haven’t met them yet, or maybe we have and they’re buried deep below the ground in cold storage facilities (oh, sweet Jesus), but they do exist. I’m fine, really. I need a drink. Or perhaps a tranquilizer dart to get to sleep at night, but I’m fine. *insert forced smile*

Overall, this was an exciting and suspenseful read with a satisfying enough conclusion. It’s quite short and easily digestible (well, except for all that gross stuff). Later characters are well-developed to make up for what I felt to be a rather rocky and icky beginning. I’d give this one 3 stars overall.

I'm a law librarian from the state of Missouri and a graduate of Missouri State University and the University of Missouri-Columbia. My real passion is in fiction, which is why I started my blog to share my thoughts with other bibliophiles. I live with my husband and two wonderful children and a collection of furry feline companions.
View all posts by Amy @ A Librarian and Her Books →
This entry was posted in Horror, thriller and tagged book review, books, LibGirlBooks, Pandemic thriller, Scary reads. Bookmark the permalink.